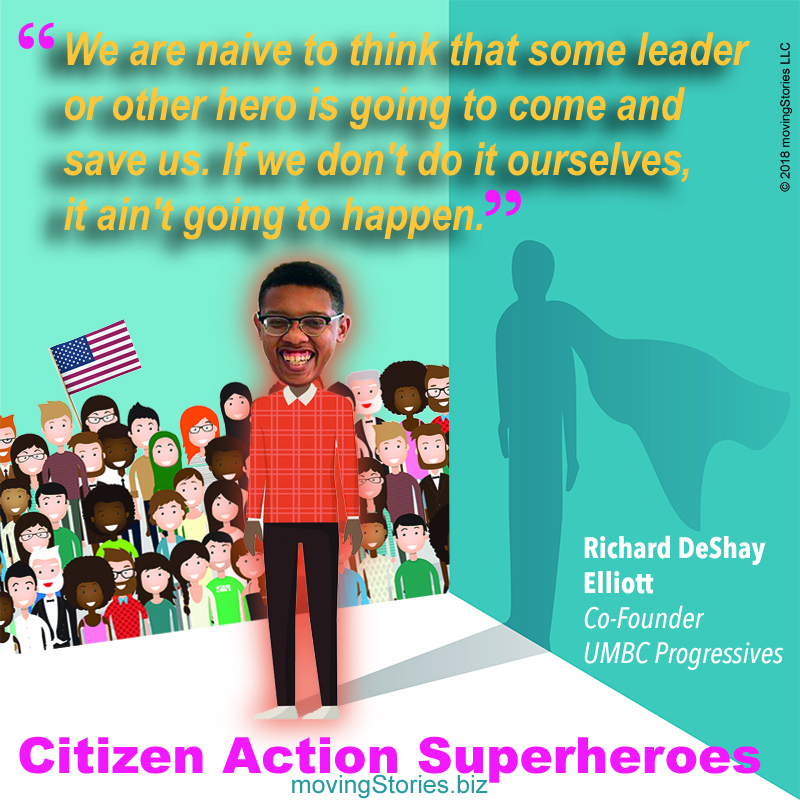 Q. What is today’s America like for you as a young person?

It’s like finding out you’ve got cancer. Then finding out you’ve got stage-4 cancer. The situation is terminal unless you start fighting back now. But we CAN get our health back if we have a good team around us. And trust me, there is a really good rising bullpen of young people who are making things happen on the political stage locally, in the state of Maryland and all across America.

Q. If you could get Americans to understand one thing, what would that be?

We are naive to think that some leader or other hero is going to come and save us. If we don’t do it ourselves, it ain’t going to happen. And if we can get as many people as possible to understand that we have to save ourselves, then I think we’ll get a lot more action done and the changes that are surely coming will happen a lot sooner.

Q. What brings you the greatest joy from your activism?

When I find somebody who I’ve known for a long time and help them see how easy it is to get involved and how great the stakes are for them, personally. That’s where I get the joy from. Showing them how little actual time it takes to do the things necessary to make even the slightest changes. For example, holding a single meet-and-greet for a candidate you really like at your house has a great impact. And when people see how easy that is, they tell their friends and it just builds a growing effect. They feel involved. They feel like they’re making a change. And for some people that’s all the difference in the world. They can understand that the things they think are their problems – I can’t afford my bills, my healthcare is too expensive, my streets are too f***** up, my housing is too expensive – are not anomalies. They happen for a reason. And if you can help them understand that by helping to elect better people and holding their elected officials accountable, they can mitigate these problems for themselves and for the next generation. That’s the key. That’s my joy.

Q. What kind of change have you seen based on your activism?

I did not think I would be able to help usher in – even in a minor way, even if I’m the least important player – the changes in the Maryland political landscape this quickly and to feel this connected to the people making the big changes. Maryland made an enormous shift to the left that nobody would have predicted a year ago. And I saw a lot of the machinations that helped it occur. Political change is a lot like life. As sexy as one big action is – say, like a march or rally – a campaign is often the sum of a lot of boring things that happen between points A and B. It’s a whole lot of door-knocking, phone banking, talking to people one-on-one and convincing them why they can do better and why their elected officials can do better. And just seeing the change from this close. I didn’t expect this. The power truly is in our hands.

Q. Despite progress, America is still imbued with racism, segregation and inequality, emboldened by the current occupant of the White House. How do we address this immorality?

One way is through education. The American education system does not care that it produces all of these people with ignorance, close-mindedness or intellectually inconsistent arguments. For instance, I learned about the Revolutionary War when I was in elementary school, as we should. But we should also learn about Malcolm X, Cesar Chavez, Fannie Lou Hamer, Anna May Wong, Dolores Huerta, Frederick Douglass, Fred Korematsu and other revolutionaries who fought and made progress, both leaders and citizen activists representing diverse groups of Americans, all of whom shaped this country for the better. There is a great reverence given to white freedom fighters but an abysmal disregard and even an erasing of people who don’t look like them. And we need to be inspired not just by the famous leaders, like Martin Luther King and Rosa Parks, but also the rank and file, the many millions of Americans who stood up, spoke out and engaged in peaceful civil disobedience. They are the true army of change, and the same applies today. And I think that’s the focus of this project: Citizen Action Superheroes.

NOTE: See the Uniting Book Bundles project for a list of amazing children’s picture books to help open hearts and minds to the gift of inclusion.

Q. Is your citizen activism going to continue even after Trump is gone?

Absolutely. I’m going to be involved until things are ideal – which I think is never going to happen – or I’m dead. I can see that there’s going to be miserable inaction if we don’t get involved. Because I see that we have to save ourselves. And that’s more than enough drive for me.