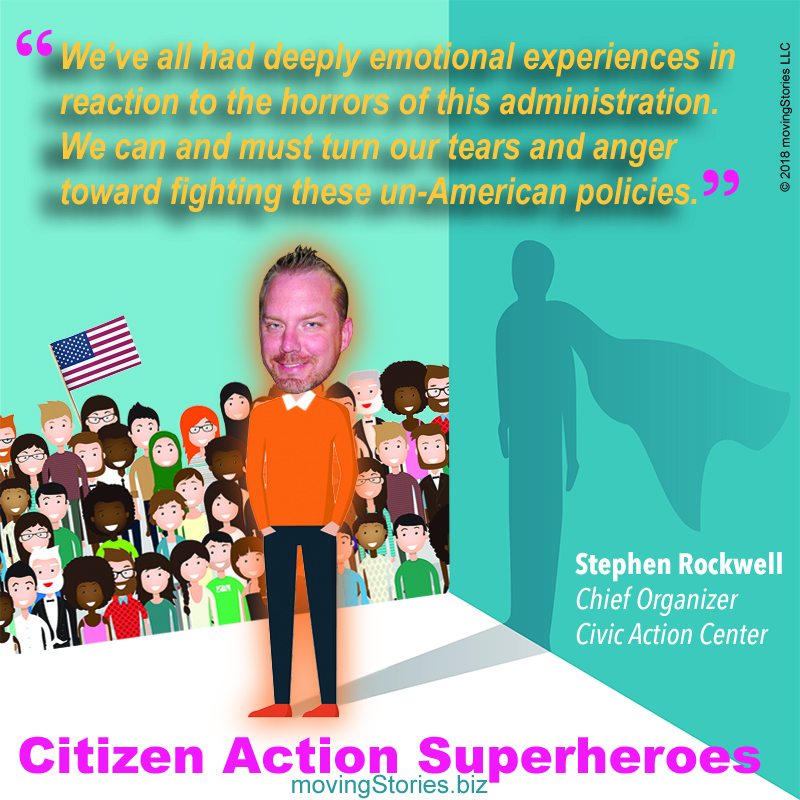 Q. Are people turning their anger and other deep emotions into action?

I really think that’s true. Over the last couple of years, we’ve all had deeply emotional experiences in reaction to the horrors of this administration. Ripping kids from their families at the border, most recently, has kept me up at night and brought me to tears. I just imagine having my own little boy and girl snatched away from my wife and me. We can and must turn our tears and anger toward fighting these and other un-American policies. These emotions are a form of fuel that comes from within. We feel them for a good reason.

We went to a “Families Belong Together” protest, along with many other Americans across the country. There’s something magical and, at the same time, down-to-earth shaking about lifting your voice up in unison with others. When you show up to a protest – the Women’s Marches, March for Our Lives – or whatever it is. Whether you show up to the big events or the small ones, there’s always a few who speak in front, but there’s a whole lot more people who stand with their signs and their voices, but they’re not on stage. I love the commitment of that. It’s something that people feel so viscerally. I think there’s a lot of power and validation in gathering and creating messages that people can get behind, affirming their shared beliefs. But the next thing is how do you turn that into action? And that’s why we created the Civic Action Center.

Q. How is the Civic Action Center incorporating the Virtuous Cycle?

We are a repository for sharing citizen actions so that when people want to get involved, they have an online hub to find what suits them by geography, date and issue. So, when someone shares an action it’s placed on our website, distributed on local Facebook pages and Twitter feeds and sent out in a weekly email to members. We work hard at creating a virtuous cycle that goes something like this: (1) People sharing and knowing about events so they can get engaged, (2) acknowledging and thanking the people who share upcoming actions and (3) after the action happens, reporting back so people feel validated and inspired to do the next thing.

It’s really valuable when people see some results or positive feedback from their actions, whether it’s a photo, an email or a simple thanks – not just asking for more money. Affirming what people are doing. When we post someone’s action to the platform, we write back and say, hey, we’re promoting this on Facebook and Twitter and our social network for activism. I can’t tell you how many times we’ve heard back from people saying thank you for doing that. It develops a connection and a conversation starts. In many ways what we’re trying to do is connect and affirm what people are doing. We are always trying to improve this virtuous cycle because that’s how we grow the movement for progress and inspire momentum moving forward.

Q. Do you get tired of people mentioning your privilege for being white, male and of means?

No, not at all. I’ve obviously been born into a lot of privilege as a middle-class white American male. And if you’ve been given that kind of privilege it has to be a part of your efforts in life to share that privilege. I’ve taken that call very seriously in everything I do. For example, I went to a top-five business school. And most of my friends work on Wall Street, in technology or startups. I’ve chosen a different path working in the non-profit sector and on social justice issues. I’m very comfortable in those choices. It feels really good and right. I don’t want to say that I don’t get burned out. But I don’t allow myself to get too down because it’s all relative. You have to keep reminding yourself, it’s not really about you. You’re not an immigrant who came here and now you don’t know if you’re going to see your kids again. So, I make that connection directly every day. And then I say all right, I need to be active. There’s no other choice for me.

Q. What is important to remember for citizen activists of all kinds?

We want to tell people that you’re not crazy for being so upset and alarmed. What’s happening in our country right now IS crazy! And what you’re doing, being active, however you’re being active, is what’s needed. It’s what’s going to make you feel better and actually make the situation better for so many others.

Also, as activists, we must realize it’s never one big event like breaking down the Berlin Wall. Sacrifice, as it relates to political engagement, is often quite thankless hard work requiring a stick-to-it-ness. It requires ongoing consistent effort. As activists, we might have a high point where a lot of people come to a protest. And then a month later, we have a meeting and only six people show up. That can be demoralizing a little bit. But you just keep at it. When we think about the Civil Rights Movement in the 1960s, many people think of Martin Luther King, the big March on Washington and his dream, which were fabulous and powerful.

But we don’t realize that millions of people had dreams, too. We don’t often recognize the fact that much of the Civil Rights Movement was black church women doing the hard work of organizing, boycotting and making sure people got where they needed to go. And there were millions of other people, black and white, who contributed and sacrificed. They were the real heroes of the Civil Rights Movement.

Unseen, unheard and, yet, the backbone driving change. The same goes for today. That’s just the way humanity rises.