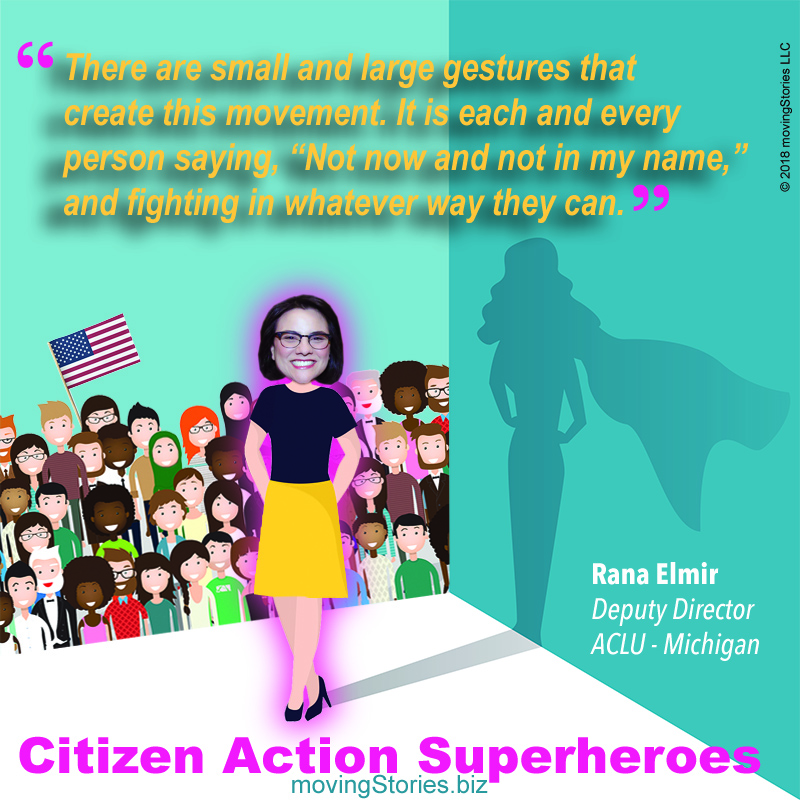 Independent activism: Extension of her work above, including educating and co-powering Muslim and immigrant communities, giving them the tools they need to stand up for themselves and those around them.

Join our activism force: Active with large Muslim and immigrant communities in the Detroit area and across Michigan [Website | Facebook]

Q. In today’s divided country, what scares you the most and how is it personal for you?

I’m not the kind of person who scares easily or who cowers at the state of affairs. Quite the opposite, especially when there is a massive ongoing assault on civil rights, on our Democracy, including the targeting and scapegoating of immigrants, Muslims and communities of color. It’s like nothing else I’ve seen before. And this moment feels different than in years prior, because the assaults have such a hard edge to them. They are being done with such hate and disregard for the dignity and humanity of individuals. And I think it’s also very different from post-9/11. People really forget what it felt like to be an American Muslim post-9/11 in this country. As a Muslim myself and a civil rights activist, it was not easy. The NSEERS program registering Muslim men and boys. The Patriot Act. Surveillance and the hate crimes. All of those things we felt deeply post-9/11.

Not only are they back, not only have they been inflamed, not only do they have that hard edge of hate to them, but they’re no longer just government actions. They are government actions that have emboldened your everyday American just walking down the street who feels that they have the permission to take up that mantle and be a vigilante or what some researchers have called a neighborhood defender. To do what they feel the federal government is doing through policies, to do that through their own actions, whether it’s discrimination, a hate incident or vandalism.

NOTE: If you doubt the hate, you should read the hate mail Rana receives on a regular basis.

Q. Were you surprised by Trump’s election and the resulting expression of hatred, prejudice and xenophobia?

I’ll be frank with you that when I speak to my friends who are Muslim or from communities of color, for the most part, we have conversations on how pedestrian the election was. How this is not surprising at all. Maybe Trump himself was a surprise but the fact that there is fear and hate that can be manipulated and brought to the fore as it has been … that is not a surprise.

Q. Have you been equally surprised at the rising up of humanity?

I was never surprised by the hate, but I am surprised by the outpouring of support, particularly for Muslim Americans who have been on the margins in the past two decades and have largely taken on their fight alone. To see tens of thousands of people make their voices heard, speaking out and marching against the Muslim bans, family separation, deportations, ending DACA and more. It was heartening and fortifying to see that. And, frankly, to see that it hasn’t stopped. There are small and large gestures that create this movement. We are not just one organization. It is not just one issue or one group of people. It is each and every person who says, “Not now and not in my name,” and continues to fight in whatever way that they can, small or large, whether it’s showing up for an airport protest in the bitter cold or donating clothing and car seats enabling immigrant families to be safely reunited.

Q. Are more people getting involved politically and in their communities?

Yes! So many people are getting engaged in ways they never have been before. For example, I have been incredibly proud of the young Muslim community members in the Detroit area. I go to a lot of community events, and they are getting bigger and younger. The young people are more vocal and taking leadership positions in new ways. They’re not waiting for someone to pass the baton but are building those opportunities for themselves. And that’s incredibly heartening to watch. In fact, these younger activists, particularly in Muslim and immigrant communities, are not stopping and that means I can’t take a break. If those who are most directly impacted and harmed are on the front lines of this fight, I need to be there with them.

Q. What formed your sense of and devotion to social justice work?

I think I’ve always had a strong sense of justice. I get that from my parents who came to the U.S. from Lebanon as immigrants who did not speak the language. Some of my earliest memories are being their translator. As a child, I had to decide whether or not to translate the ways in which people talked down to them, demeaned them, called them racial, ethnic and religious slurs. But I didn’t often need to translate those words because the sentiments could be felt. Hate and bigotry is a universal language. And you don’t actually need to know what the words mean to feel the hate and to know the harm behind them. I often felt really embarrassed and afraid during those moments.

Obviously, in hindsight, I didn’t have the tools to deal with the overt racism, anti-immigrant sentiment and Islamophobia that my parents were feeling at the time. And I have dozens of similar stories where I learned lessons about fairness, tolerance and justice. All of this ultimately shaped my own spirit and who I am, guiding my work in social justice today. I believe obstacles are intended to light our path forward. Once a helpless child, now I co-power others through know-your-rights presentations, giving people the tools to stand up for themselves and those around them who may be harmed.

Q. Some people are reaching out to the other side while others are focusing on fighting for change. How do you feel about these two different approaches?

I absolutely think that there is room for many tactics. Individuals have to find what works for them and what is right for them. There’s no right or wrong way to do this. I think the only wrong thing is doing nothing.