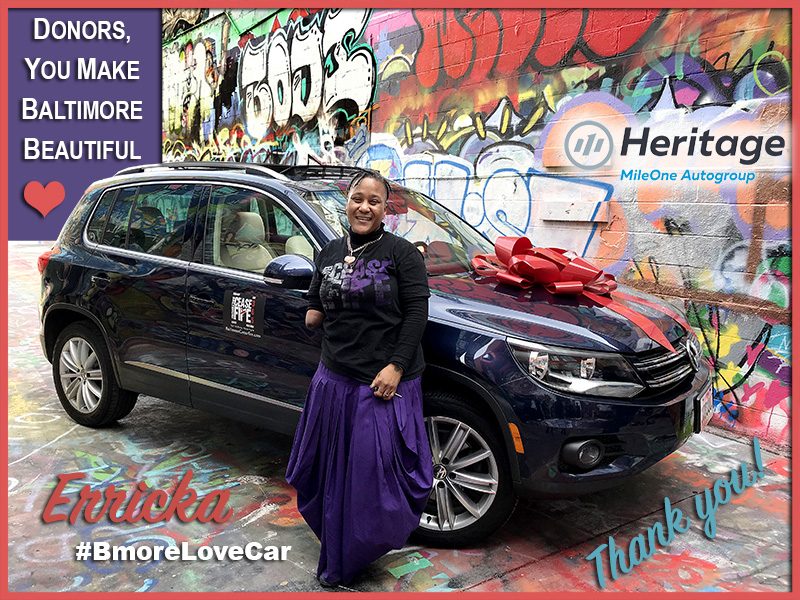 When Baltimore peace activist Erricka Bridgeford shared her vulnerability and asked for help, people opened their hearts and much more. One simple ask snowballed into a needed car for a beloved activist and a high-profile event providing a broader boost for the Baltimore Ceasefire movement.

Erricka Bridgeford is a leading conflict mediator and co-founder of the Baltimore Ceasefire 365 movement. After Erricka shared her stress over unreliable cars, a Facebook friend (one she had never met) offered a simple suggestion: “What about a GoFundMe campaign?” When another friend basically said, “Let’s do it!” the wheels started rolling. Working closely with Erricka, a small team of friends got busy. Right off the bat, another good friend offered a shrimp-and-grits brunch reward for the first 150 donors and they appeared within days. This was a true community event of love!

In just 10 days, 245 people donated over $12,000 with donations ranging from $5 to $500, every dollar conveying the same love. The generosity of so many caught the attention of The Baltimore Sun who picked up this moving story. Soon thereafter, Amy Elias of Profiles PR not only made a generous donation herself, but contacted her client Steve Fader, CEO of MileOne Autogroup who gave Erricka a car! After asking Erricka what she wanted and needed, they gave her a beautiful 2013 Volkswagen Tiguan SUV with a sunroof and warranty. With a car in hand, the money raised was then set aside to help pay for gas, insurance and service along with the costs of fulfilling the rewards for donors, with any balance donated to Baltimore Ceasefire.

But the community was not yet finished giving. Amy Elias planned and managed a celebration-and-gratitude event at Baltimore’s Motor House whereby Erricka received the keys to her new #BmoreLoveCar, surrounded by friends, donors and the Baltimore mayor. So, what started as a simple ask became a boost to a beloved activist, the powerful Baltimore Ceasefire movement and the entire city of Baltimore.

When we give cheerfully and accept gratefully, everyone is blessed.
— Maya Angelou