“No unity without accountability.” – Kerry Washington 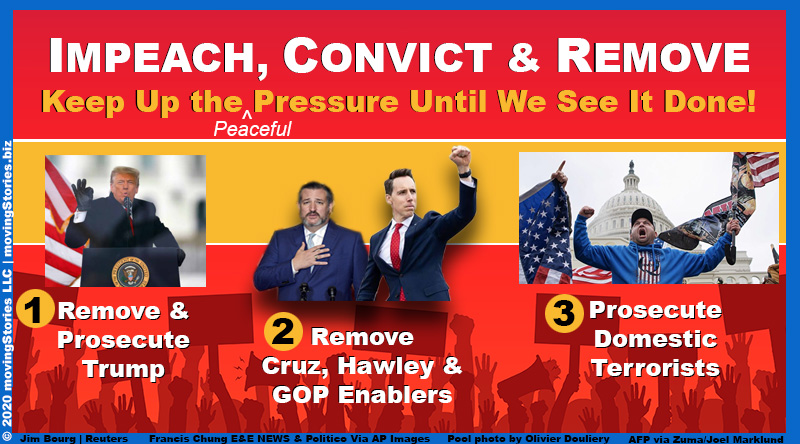 Do Something Every Day

UNITE IN REVOLUTIONARY PEACEFUL ACTION: (1) PRESSURE OUR ELECTED OFFICIALS AND (2) ORGANIZE OUR FRIENDS AND FAMILY! Long-spewing white supremacy, racism and lies exploded into violence with an attempted coup at the U.S. Capitol and continued election-fraud conspiracies. Trump, Republican enablers and domestic terrorists remain a danger to America with more attacks anticipated. We must hold them accountable, stop further violence and set America on a course for justice.

ORGANIZE – Get Others Engaged!

LOBBY – Use Your Voice!

We-the-people hold real power to peacefully lobby and pressure our elected representatives to pursue the path of accountability and justice. The following steps, resources and messages make it easier to do so. We also share sample subjects and messages at the bottom of this page. Let’s flood them with the power of our collective voices. HEAR US ROAR!

(A) Push Republican Senators to Vote “YES” to Convict & Remove Trump for “Incitement of Insurrection.”

(B) Chastise Those Republican Senators Who Voted to Overturn the Election (even after the deadly U.S. Capitol Coup).

Without any evidence, almost 150 Republicans (including the 8 Senators listed below) in Congress voted to overturn a free and fair election even after Trump incited domestic terrorists to violently stage a coup at the U.S. Capitol. Tell them how you plan to work to remove them from office during the next election cycle. ARTICLE: The 147 Republicans Who Still Voted To Overturn The Election After The Capitol Siege

Including a “subject” is always important because then Senate and House staff can quickly “hear and register your voice” which is so important during this unprecedented turning point in America. Feel free to copy parts or pieces and adjust to match what you are thinking and feeling. Keep it short and potent, yet decent.

SUBJECT: Impeach, Convict, Remove & Prosecute Trump
SHORT MESSAGE: Trump remains a grave danger to America. I urge you to vote to impeach, convict and remove Trump and prevent him from holding future office. Trump must also be prosecuted to the full extent of the law. If we don’t punish Trump’s violence against our people and our democracy, what’s to stop the next demagogue? Trump can’t be allowed to escape justice yet again. A majority of the American people want you to do the right thing. Thank you for hearing us.

SUBJECT: Remove & Prosecute Republican Enablers & Domestic Terrorists
SHORT MESSAGE: Trump’s Republican enablers and domestic terrorists remain a grave danger to America with more attacks anticipated. We must hold them accountable, stop further violence and set America on a course for justice. I urge you to investigate and bring to justice any U.S. Senator, Representative and/or citizen who contributed to or engaged directly in the election-fraud conspiracy and violent coup attempt that killed 5 people and ransacked the heart of our American government. A majority of the American people want you to do the right thing. Thank you for hearing us.

SUBJECT: Your Vote to Overturn a Free and Fair Election is Unacceptable
SHORT MESSAGE: Without any evidence, you and almost 150 Republicans in Congress voted to overturn a free and fair election even after Trump incited domestic terrorists to violently stage a coup at the U.S. Capitol. A majority of the American people wanted you to do the right thing. But you failed. Lies, conspiracies and violence beget fascism. I urge you to reconsider your actions moving forward. Please know that I will be working to unseat you in the next election. And will do so with truth and peaceful action. America can be better than this. We will make it so. What will you be doing to make amends and strengthen our democracy?

“I’m fed up with fascists calling for unity. The rest of us have to unify against them.”
— Robert Reich