What are your citizen action superpowers? 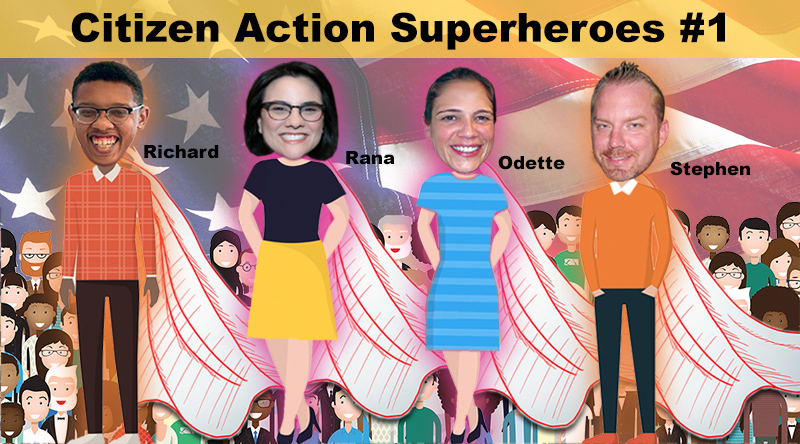 This is a new series on Citizen Action Superheroes, those wearing both small and large capes. There is confidence knowing you are not alone but working side by side with millions of others to forge a more united and generous America. We are counting, uplifting and fertilizing the grassroots so the grass can be greener for everyone. #UnitedGenerousAmerica

What if I told you that the greatest force for change in America is being overlooked?

The mainstream media does a fine job covering three of the major power centers: (1) the raging chaos in the White House, (2) the divided, team-Trump Congress and (3) the valiant efforts of our Judiciary to block the destruction. Hooray for the fourth estate sharing real news! However, where are We-The-People in the mix? Overlooked and not covered nearly enough. We are more than just votes to be counted at election time. We are the greatest force in America, exploding in newfound and record ways. And change happens from the bottom up, remember?

We are an unseen, growing army of Americans taking unprecedented action, ranging from independent steps, joining citizen-action groups (e.g., Indivisible, SwingLeft, People Power, MoveOn), creating startups and forming roving bands of volunteer activists – peaceful ones, of course, the most powerful kind. If you squat down and place your hand on our good American soil, you will feel the rumbling of our earthquake arising.

This month I talked to four amazing Americans who shared their citizen action superpowers and cheerleading efforts to uplift others. I never realized, personally, how good it would feel to connect with and hear the voices of those with whom I share a heart. Real voices. Live energy. Beyond social media. We are the underground activists rising. These are their stories. Listen, learn and share, because when we link our roots, the grass will become greener for everyone. And I promise that when you pick your head up from your own citizen action toil in the trenches, you will feel emboldened by the number of bright faces smiling back at you. Sweaty. Happy. On the march.

I met these amazing human beings through friends of friends, interacting with them on Facebook over many months. All hold full-time jobs and are also engaged in activism on the side, carving out precious time from their families and personal lives, often using their own money and resources. Based on their activism and open spirit, I knew I wanted to talk to each one. Turns out, they represent a beautiful spectrum of America, including a radical Catholic Latina woman, an atheist millennial black man, an Arab Muslim woman and an Episcopalian white man. What do they all have in common other than their shared American citizenship? Smart minds. Big hearts. And courageous boots on the ground, carrying America and humanity forward.

We are the Great American Wave. To November 2018 and beyond!

Content herein captured and edited from creative conversations held over the phone in late July 2018 with each citizen action superhero and the author of this piece.